The Big Bad Wool was a character in the stage play Fairy Fables. He was a sheep who triesd to steal Prince Redhood's Hat's croissant basket and, after being denied the croissants, huffs and puffs until all of the surrounding trees fell down.

He was then distracted by a unicorn flying through the sky, leaving Prince Redhood to escape to the castle. 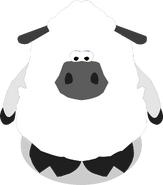 What the Big Bad Wool would look like in-game.
Community content is available under CC-BY-SA unless otherwise noted.
Advertisement