Welcome to the Box Dimension.
This mysterious place is the source of all boxes.
Please leave the laws of physics at the door.
The Box Dimension was a dimension composed entirely of cardboard boxes. It had a low gravity environment, which caused lightweight objects to float, such as boxes, plants, and snowballs. The Box Dimension also served as a gateway to other dimensions through its many box portals.

While only a portion could be seen as a room, the Box Dimension was incredibly vast, and the full scope of it is currently unknown. The very top and bottom of the dimension were clouded in a purple mist, which appears to be impassable (Although in Puffle Launch, Elite Puffle Blast was seen to be able to go right through it). The dimension itself could only be accessed by a portal, which could be in the form of the Portal Box furniture item or through portals at Parties.

Scrapped design for the Halloween Party 2018 1

Scrapped design for the Halloween Party 2018 2 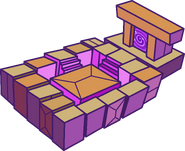 The platform in Puffle Launch.