All players can obtain free items and coins from the interface upon reaching a certain Coins for Change donation goal, as well as doing tasks related to Holiday Party 2019 to earn coins. 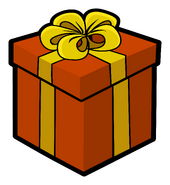