Daisy was one of the protagonists of the Stage play Underwater Adventure, along with Fiesel. In Underwater Adventure, she played as a professional diver on a quest to find the lost town of Penglantis with her companion Fiesel. During their journey, they encountered a lobster named Toby the Lobster and a fish called Wise Fish who assisted them both by guiding them to the city, which they then shortly found.

Daisy was a blue penguin, and her outfit consisted of: 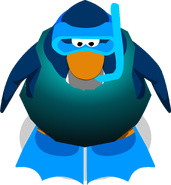