Give a 10,000 coin donation to Coins For Change
Epic Volunteer is an extreme difficulty stamp in Club Penguin Rewritten. It could be obtained by donating at least 10,000 coins during Coins for Change. It was removed in March 2017 and returned on December 26, 2018.

The stamp being earned 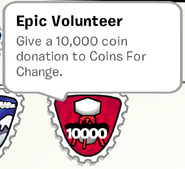 As seen in a Stamp Book
Add a photo to this gallery
Retrieved from "https://clubpenguinrewritten.fandom.com/wiki/Epic_Volunteer_Stamp?oldid=232833"
Community content is available under CC-BY-SA unless otherwise noted.