Club Penguin Rewritten Wiki
Register
Don't have an account?
Sign In
Advertisement
in: Games, Singleplayer Games, The Fair 2017,
and 10 more

Feed-A-Puffle was a game exclusive to the Fair. During the gameplay, the player had to shoot Puffle-O's to feed different colored puffles.

Each puffle in the game behaved differently and givesgave a different amount of tickets once fed.

The game ended after 100 Puffle-O's were used or when 100 puffles appeared. Afterward, the player would gain their tickets. 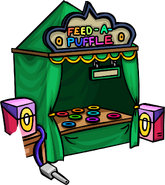