The Halloween Party 2019 was a party on Club Penguin Rewritten. It was confirmed on the What's New Blog. This party allowed players to transform into a Living Sled with the Sled Maker 3000.

Two weeks before the party started, Gary the Gadget Guy had an idea to turn the Night of the Living Sled (series) into reality to scare penguins for Halloween. He wanted to create a machine that transforms penguins into Living Sleds from the series.

Despite the machine turning penguins evil, Gary decides to let players use it anyway, but he gives them a warning before using it. On Halloween, Herbert P. Bear took over and tried to force everyone to be sleds, with The Sledpocalypse.

Near the end of the party, Gary was on the server Blizzard and gathered with EPF Agents at the EPF Command Room. Many of the agents were aware that Herbert was on Sleet at the same time. Gary then told the agents:

The agents asked if Gary would be confronting Herbert with them, to which Gary responded:

A confrontation then occurred where Herbert was chased by the sleds towards the west of the island. Herbert eventually went into hiding after one last push of the sleds at the Ski Village.[1][2] Before Herbert left, he promised that the penguins would not see the last of him.

A sneak peek of the homepage shown on the blog. 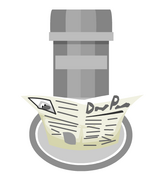 A sneak peek posted by Hagrid on Discord.

Earlier version of the Town.