Arch-enemy of the Elite Penguin Force

Herbert Percival Bear, Esquire (often referred to as Herbert) was a polar bear and the main antagonist of Club Penguin Rewritten since his first appearance in PSA Mission 5: Secret of the Fur. He was the only known polar bear on the island.

Unlike a typical polar bear, Herbert hated cold weather. He also could not swim and was a vegetarian. After his first appearance, Herbert had tried to take over the Club Penguin Island and turn it into a warm island paradise with his partner Klutzy.

By meeting him, you could obtain a free background and stamp.

In May 2017, he was awoken from hibernation when Klutzy stole Gary's mystery invention from the Gadget Room, which exploded on arrival in his lair, causing his lair to fill with water. The water caused Herbert to break free, which freed him from his hibernation status. He was then seen floating in the ocean, as seen in Rock-a-bye Herbert.[1]

Herbert next appeared during the Battle of Doom where he had stolen the Hydra used in the Medieval Party to damage the Everyday Phoning Facility. During this time, players could access the EPF Rooftop in which they would spot Herbert who unveils his plan, then proceeds to attack the player with his Hydra Bot. The battle was very similar to fighting the Hydra at the end of Ye Knight's Quest 3.

Herbert was seen at the end of Halloween Party 2017, where he kidnapped Gary.[2] He forced Gary to help him build the Solar Laser, then froze him after the job was done. Around the Solar Laser, a fortress for Herbert was ordered and built. Inside the fortress was a private spa designed for him.

During Operation: Blackout, Herbert caused massive damage to the EPF Command Room, Everyday Phoning Facility, and the PSA HQ. He immediately took over the island and became de facto "Illustrious Leader Supreme of Club Penguin Rewritten", and renamed the island "Club Herbert".[3] He had statues of him placed throughout the island and the island became consecutively darker and colder each week.

He took control of most news media for two weeks, including the Club Penguin Times, the What's New Blog, and the CPRewritten Twitter account. Upon taking control, he threatened to imprison resisting agents in freezer pods.[4] He imposed new rules on the island,[5] and planned for a "Quiet Party" and a "Polar Bear Party" to be celebrated.[6]

Herbert made a small appearance during the Waddle On Party. Rookie and Jet Pack Guy were around to watch his mischief.

Almost two years after Operation: Blackout, Herbert made his big return during the Halloween Party 2019, where he sent an EPF Message to agents. He taunted the agents and told them he had a new plan, which involved Gary's new invention. A week later on Halloween, Herbert took over the island with an army of sleds, causing The Sledpocalypse. The sleds took over the Club Penguin Times, the What's New Blog, the Penguin Style, and the CPRewritten Twitter, similar to Herbert's takeover during Operation: Blackout. Herbert ordered for every penguin into a sled, and for all rooms to turn black and white. 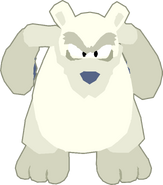 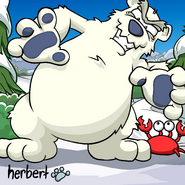 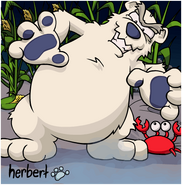 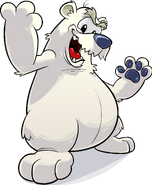 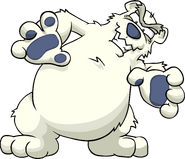 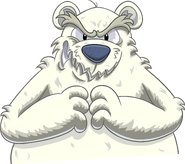 Herbert in the Operation: Blackout Homepage and Login Screens.

Herbert on the front cover of Herbert Style. 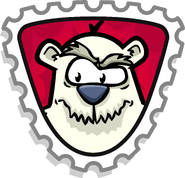 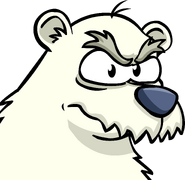 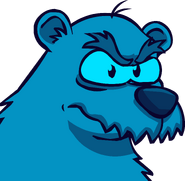 Cutouts of Herbert in the Herbert Style.

Herbert roaring in the Ski Village in a What's New Blog post.

Ruler of the Island.