For items obtainable exclusively from the Holiday Calendar, see here.

Sneak peek of the Beach posted on the What's New Blog.

Sneak peek of upcoming features for the party posted on the What's New Blog.

Full sneak peek of the Town posted on Twitter.

Sneak peek of the Forest posted on Discord.

Beacon Telescope with The Migrator far off in the distance

Beacon Telescope with The Migrator close to the island 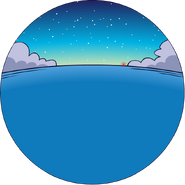 Player Cards during the party

The Toolbar during the party