Hydro-Hopper was a singleplayer game in Club Penguin Rewritten and could be accessed through the Dock.

In the game, the player rode along on an inner tube, towed by a motorboat, and had to go through the various levels. The inner tube followed the mouse in an arc, based on its horizontal position, and the player could jump by pressing the left mouse button or with the space bar.

In each level, a series of obstacles appeared on the screen, and the player would have to avoid them. Running into an obstacle tipped the player over, and the player lost a life, from a total of 3. Starting level 2, the player could gain another life by collecting white life rings, but could never have more than 3 lives left. The game ended by being tipped over without having lives left.

Whenever the player dodged an item, they would receive 1 point, or 10 points if they jumped over the obstacle; the only exception being gray buoys, which would tip the player over anyway if they tried to jump over it. In the end of the game, the player earned coins for every 10 points from the total score, rounded to the nearest multiple of 10. 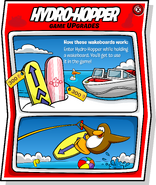