1 and the Green Puffle

Jet Pack Adventure was a singleplayer game in Club Penguin Rewritten that could accessed through the Beacon.

Players could bring their Green Puffles into this game, which helped collect coins.

Players travel from location to location using a jetpack, collecting coins along the way. If the player runs out of Jet Packs, a short cut scene shows the penguin falling from the sky and falling (in the Mine levels, the player does not reach the floor). Extra fuel and 1-ups can be collected, but you must watch out for anvils and coffee bags. Other occasional obstacles may come, such as a shark or fish.

If the player makes it to the end of Level 5, they travel to the Mine. If a player loses before the end of the game, he or she will land in the room they were flying above before they lost, which is unknown when you are flying. 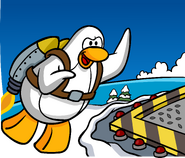 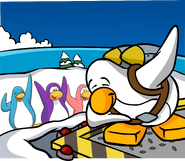 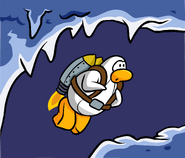 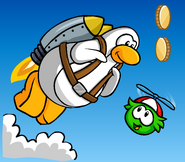 The message that appears after you complete the game without collecting any coins.