Klutzy was a crab in Club Penguin Rewritten who was the sidekick and pet/best friend of Herbert P. Bear. He was first seen in PSA Mission 5: Secret of the Fur where he was with Herbert terrorizing penguins as a "crab monster".

On November 11, 2020, Klutzy was made an official custom mascot in time for the upcoming operation, Operation: Swarm. However, due to the cancellation of the operation, he made his first debut right before the Holiday Party 2020 instead.

In PSA Mission 6: Questions for a Crab it was revealed that Herbert and Klutzy's relationship begun when Klutzy had saved Herbert from drowning after Herbert's iceberg had tipped. He brought him onto Club Penguin Island where Herbert's hatred for penguins started to grow. From there, they became colleagues and never left each other's sides.

In Secret of the Fur, Herbert P. Bear and Klutzy both terrorized citizens of Club Penguin Island by having Klutzy jump on Herbert's shoulders and scare people as a "furry crab monster".

In Questions for a Crab, Gary attempted to interrogate Klutzy in order to get answers for the situations happening around the island. Klutzy escapes and runs back to Herbert's hideout in The Wilderness. After meeting Herbert for the first time, he explains his backstory and his plans to chop down the Ski Lodge while having Klutzy power the machine. Afterwards, you will sabotage their plans.

In Clockwork Repairs, it is revealed that parts of the Clock Tower have been missing and Klutzy was responsible for taking the target of the clock.

In Mysterious Tremors, Klutzy was seen helping Herbert steal the Boiler from the Boiler Room. However he caused more issues rather than help, delaying the stalemate until the player were to show up.

In Operation: Spy and Seek, after setting up a camera, the player and Gary the Gadget Guy watch as Herbert talks to Klutzy about his next plan involving puffles. Unintentionally, Klutzy's foolishness results in Herbert finding the hidden camera.

In Waddle Squad, he was at the Dock holding up a cardboard Herbert in an attempt to distract the agent away from the Night Club where Herbert was going to attempt to steal the Golden Puffle.

In The Veggie Villain, Klutzy's role was very subtle. He was simply playing video games while the confrontation between the agent and Herbert is going on.

In Operation: Hibernation, after you capture Herbert, he escaped the trap which Herbert was in (due to the fact Klutzy can't adapt to the cold) and retreated, leaving Herbert alone.

In Battle of Doom, Klutzy repaired the Hydra Bot while Herbert used it to attack penguins. 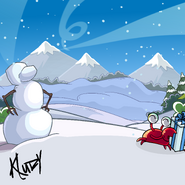 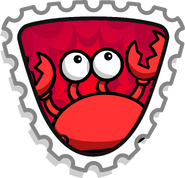 Klutzy stealing the target in Mission 7.

Klutzy playing with a beach ball during Mission 9.

Klutzy falling down the Test Run in the mission "Questions for a Crab".

Klutzy trying to escape the HQ in Questions for a Crab.

Klutzy stuck in a cage in Questions for a Crab. 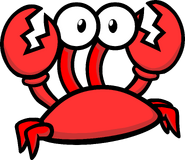 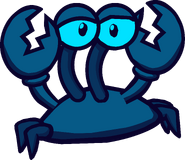 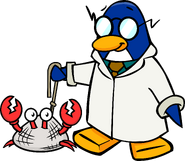 A captured Klutzy being held by Gary in one of the PSA Missions. 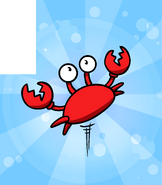