Costumes, new and old were present along with a "very old book" containing very "important information." Issue #114 also confirmed something akin to buried ruins of an ancient city; and we have since learned the existence of a Dragon Queen, opposite that of Scorn the Dragon King as well as tremors being a sign prior to the beast's arrival.

On August 10, 2019 an update occurred which included the ability to re-fight the Dragon Queen after defeated, free item boxes scattered around the items and multiple box fixes.[1]

Castle of the Lost (first week)

Castle of the Lost (second week) 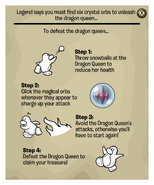 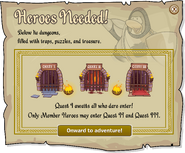 Concept art of the Dragon Queen.

Sketch of the Castle Entrance.

Sketches of the Dragon Queen battle.