Every day at 12am Penguin Standard Time until June 22, 2020, the interface would update with a new item. 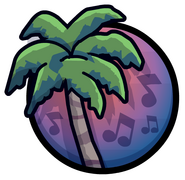 Earlier version of the interface.