Be resourceful, be remarkable, be ready.

Merged with the Elite Penguin Force

The Penguin Secret Agency (abbreviated as the PSA) was a secret sister organization to the EPF. Their headquarters were located at the HQ. Their goal was to help keep Club Penguin Rewritten safe when the moderators were unable to. The PSA was previously destroyed in the Popcorn Explosion in 2010, but it was recovered by the EPF in 2017. It was operational from 2017 to 2020.

Clicking on the Moderator Badge at the top right of the screen would display a list of Club Penguin Rewritten's rules; finding the secret (click on the chat nicely icon) will prompt you with a test which you can take.

A popup would appear detailing the PSA's mission as well as the benefits of being a secret agent. Afterwards, you could choose to either take the test or not.

If you managed to pass the test, a popup would appear saying that you will be sent for approval. Once you were approved, you would be given the Spy Phone and access to The F.I.S.H. (the Factual Informative Spy Handbook) as well as the HQ. However, if you got even one question wrong, you would not pass the test.

There are also eleven available PSA Missions. They are logic-based puzzles involving problem-solving, interaction with other special agents and keeping Club Penguin Rewritten's main antagonist, Herbert P. Bear, at bay. Most, if not all, of the missions would be considered challenging, and require thorough thinking and reasoning to complete. They could be accessed in the HQ through the Top Secret panel in the bottom right corner.

They were also formerly accessible through the VR Room, which could be accessed through the EPF Command Room. However, the VR Room was destroyed during Operation: Blackout in 2017, hence you can only access the missions if you are an agent.

Welcome to the PSA Postcard.

A group of PSA Agents as seen in Penguin Tales: Volume 2. 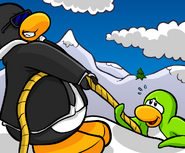 A PSA Agent rescuing a penguin.