Each issue also included two special sections called "Penguins at Work" and "Item of the Month", which were updated with every new issue. In addition, there were also multiple hidden items that could be found by clicking on specific areas in the catalog.

Each catalog featured a Penguins at Work section, which featured a new job for penguins every month. These were certain types of clothing items that allowed a penguin to perform a special action while wearing them. There were also special actions that came with other items in the catalog, not just the job of the month.

Since the January 2018 catalog, in addition to the monthly featured jobs, the Construction Worker, Barista and Pizza Chef items were able to be purchased year-round. In addition to this, each catalog had a Clearance section, which contained items which would not be featured in next month's Penguin Style.

Item of the Month

Main article: Item of the Month

Beginning with the Penguin Style Aug'18 catalog, a new section called Item of the Month was added, showcasing a custom item that would not return to any catalogs in the future.

However, on June 20, 2021, stu confirmed that Club Penguin Rewritten would be ending the section beginning with the Penguin Style Jul'21 catalog.[1] The team stated that the reasoning behind this decision is due to them not enjoying creating them and restricting items anymore. Along with this, they stated that any previous Item of the Month was eligible to return to the game in future catalogs. 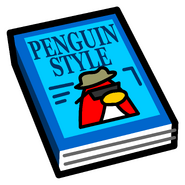 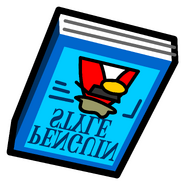 The icon during the April Fools' Party 2019.