Shellbeard made his first appearance as a mascot during the party.

Beginning on December 22, 2021, during the Holiday Party 2021, a pirate ship filled with pirate crabs could be seen from a distance. In a What's New Blog post on January 7, 2022, it was revealed that the captain of that crew is Shellbeard, a ghost turtle and an enemy of Rockhopper. Shellbeard was spotted near Shipwreck Island, an island that was discovered during the Island Adventure Party: Rockhopper's Quest.[1] His intentions were to invade Club Penguin Island with his pirate ship, The Black Shell, to collect every single coin to be found on the island. Meanwhile, his pirate crab crew planned on sinking the The Migrator.[2]

Upon logging in for the first time during the party, players were greeted by Rockhopper and Shellbeard. Shellbeard discussed his plans and stole 100 coins from the player. Rockhopper immediately gave the player their coins back and stated that he and Gary had been working on a plan to stop Shellbeard and his pirate crab crew from succeeding. He then told players that they would have to duel Shellbeard's crew in order to prevent him from winning. They would also be able to earn items by doing so.

Towards the end of the party, it was revealed that prior to the arrival of Shellbeard and his crew, Rockhopper and Gary had created an exact replica of The Migrator and put it in place of the original. The replica could be seen during the party's construction. This would allow Shellbeard and his pirate crab crew to believe that they were successful at sinking the ship, when in reality the real Migrator was perfectly safe.[3] In order to get Shellbeard and his crew to leave the island, they gave him a fake treasure map that leads to an island that does not exist.[4]

The following stamp was also available to collect during this party:

Full sneak peek of the Ski Village posted on the What's New Blog.

Full sneak peek of the Ski Hill posted on the What's New Blog.

Sneak peek of an in-game duel posted on the What's New Blog. 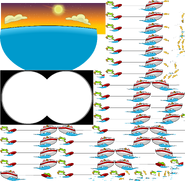