Pizzatron 3000 was a singleplayer game in Club Penguin Rewritten that could be accessed in the Pizza Parlor. The machine itself was invented by Gary the Gadget Guy, and it was designed for chefs to create many pizzas quickly. It was a multi-purpose machine that could be used to make both seafood pizzas and candy pizzas.

Each correct pizza gave five coins. The amount increased by five when five pizzas in a row were made correctly. The game ended when five mistakes were made or when there was no more orders to make.

The hidden Candy mode could be played by clicking on the red lever on the left side of the game's main menu. By doing this, you could earn a stamp. Candy mode replaced the toppings with licorice, marshmallows, chocolate chips and jellybeans, as well as the sauces with chocolate sauce and strawberry icing.

Each correct pizza gave an extra five coins, however, the speed of the game was faster than the regular mode. This mode also randomized the pattern of pizza orders, not going in a progressing order like Normal Mode. 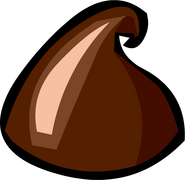 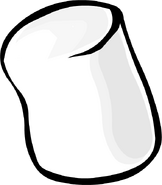 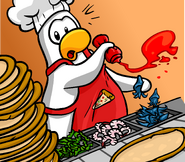 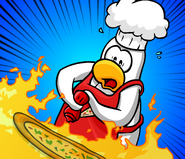 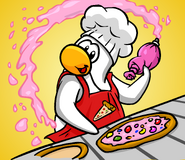 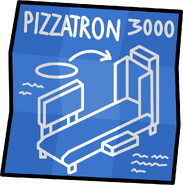 The blueprints in the Sport Shop.
Community content is available under CC-BY-SA unless otherwise noted.
Advertisement