Prince Redhood was a prince in the play Fairy Fables. He started off in the play delivering croissants to the princess. While traveling through the enchanted forest, he encountered a sheep. The sheep wanted the croissants, and so when he did not get them, he inhaled deeply and then proceed to blow the prince away.

The prince luckily escaped, and reached the princess. After breaking the princess' trance, she prefered not to have the tasty treat, and so the prince gave them to the sheep.

Prince Redhood was an orange penguin, and his outfit consisted of: 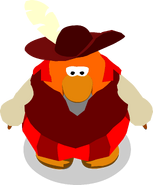 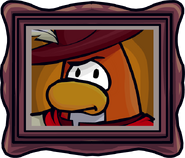 A picture of him in the Haunted House during Halloween Parties.
Community content is available under CC-BY-SA unless otherwise noted.
Advertisement