Underground Pool (with the windows closed) 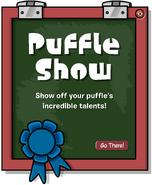