Puffle Rescue was a singleplayer game in Club Penguin Rewritten that could be accessed at the Mine. In the game, players rescued puffles that are lost at the end of the levels and cannot go back on their own.

In the Ice Levels, the player had to walk on moving ice bricks that floated above water in order to save 1-3 Blue Puffles each level which were found on special platforms, which were also used as check points. If the player fell into the water, they lost one life and had to start the game from the latest check point. The money bags in this area were hidden among small puzzles.

In the cave levels, the player had to save Pink Puffles from caves, the gimmicks being bats that picked your penguin up, snowball cannons, mine carts that moved, and the difficulty increasing with every 3rd level. In some of the levels, you had to go off of the cliff and you would get a bag of coins if moved correctly. There were also two types of crates you can step on. Crates that were not barricaded would open after a few seconds, and you had to step away from it before you fell. The crate would close again after a while. Crates that were barricaded were safe to step on as they would not open at all.

In the underwater, the player had to rescue Black Puffles. The player used a blue swimsuit to swim from the different bricks of the game, but if they stayed in water for too long, they eventually sunk and had to start over. There were also Octopi which stung the player if they got too close, making them lose a life. The money bags in this mode were either on hidden paths, or float by the main path.

On the first level of this mode, the player could follow the Giant Squid by bouncing on the trail of bubbles it left behind. This would lead the player to a hidden part of the level which lead to the Underwater room, which had a hidden Moss Key Pin inside.

During the ice level.

The game over of ice level. 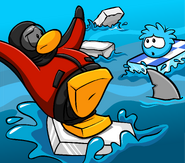 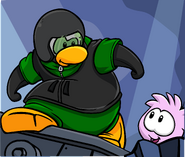 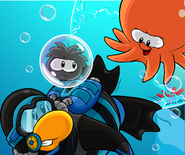