Puffle Roundup was a singleplayer game in Club Penguin Rewritten that was accessible through the Pet Shop.

The objective of the game was to round up all the Puffles into a pen. When playing, the player had to move their cursor to move herd puffles into the pen. The player had 120 seconds in each round. If puffles were driven out of the area, they escaped.

The score was based on how many puffles and how much time was left. After that, the time was multiplied by the amount of puffles in the pen (Ex: 67×9).

Each puffles sensitivity to the mouse cursor from least sensitive to most sensitive:

Each puffles speed from slowest to fastest: 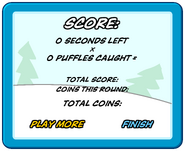