Club Penguin Rewritten Wiki
Register
Don't have an account?
Sign In
Advertisement
in: Games, Singleplayer Games, The Fair 2017,
and 6 more

Puffle Shuffle was a game exclusive to the Fair. During gameplay, the player had to watch all three top hats with three different colored puffles each inside; they had to pick the top hat with the right puffle inside to win an amount of tickets.

The game continued until the player loses all three of their lives (depicted as top hats) and would be given tickets to spend at the Prize Booth. 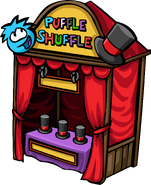