Pirate, Captain of The Migrator

Rockhopper was a friendly pirate who regularly visited the island, usually with gifts, or knowledge. His ship, The Migrator, could be spotted docked at the Beach during his visits. He was always accompanied by Yarr on his adventures, the first red puffle ever discovered.

He published a journal of his adventures which could be read in the Book Room. When he visited Club Penguin Island, he sold rare items brought over from Rockhopper Island and other places. He often gave away a free item, and sold other items, such as backgrounds, furniture, clothing items, and other wares.

By meeting him, you could obtain a free background and a stamp. He was sometimes accompanied with Yarr when he was online.

His ship, the Migrator, was his main form of transportation to-and-from Club Penguin Island and Rockhopper Island.

The Migrator was supposedly built from wood as, according to Rockhopper, it was assembled on Club Penguin Island. It was a streamlined ship with two floors, high-rise sails, and multiple portholes. Rockhopper has used the ship in many expeditions for which he has documented in his journal.

Rockhopper was shown to be a seafaring, adventurous pirate who was extremely brave and courageous. He enjoyed cream soda and stinky cheese, and adventures for treasure. He also was shown to be incredibly kind to other penguins.

Rockhopper was a red penguin, and his regular outfit consisted of:

During the Island Adventure Party: Festival of Fruit, he also wore a belt and face paint.

During The Fair 2019, he also wore a Migrator Mascot Body.

Rockhopper visited the island at least a few times each year, making him one of the most common mascots to meet. He regularly visited for parties and events.

Rockhopper with his puffle Yarr in-game. 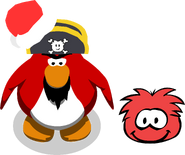 Rockhopper during the Island Adventure Party: Festival of Fruit in-game.

Rockhopper during The Fair 2019 in-game.

Rockhopper during the Holiday Party 2020 in-game. 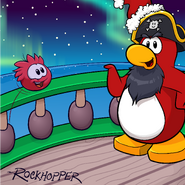 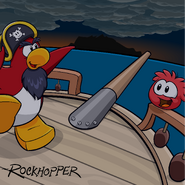 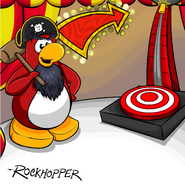 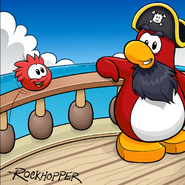 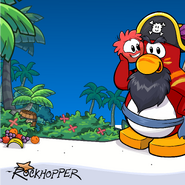 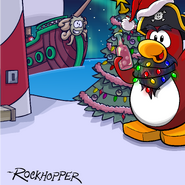 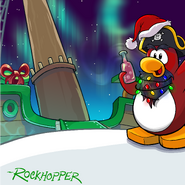 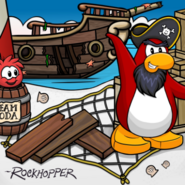 Rockhopper in issue #3 of the Club Penguin Times.

Rockhopper and Yarr reading The Journal of Captain Rockhopper in issue #12 of the Club Penguin Times.

Rockhopper in issue #29 of the Club Penguin Times.

Rockhopper wearing the Migrator Mascot Body in issue #123 of the Club Penguin Times.

Rockhopper's artwork when receiving a message from him after entering the Swashbuckler Trading Post, Dinosaur Island, or Shipwreck Island for the first time. It was also shown when logging on for the first time and attempting to open a treasure chest too early during the Pirate Party. 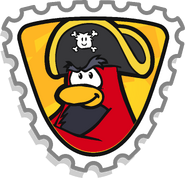 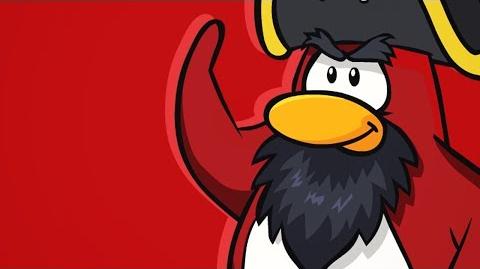 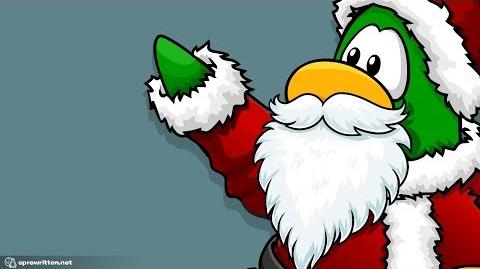