Not to be confused with Sage, an artist for Club Penguin Rewritten. 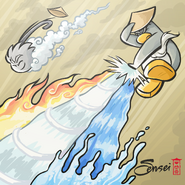