Shadow Guy is a superhero who allies with Gamma Gal. He is one of the main characters in the play Squidzoid vs Shadow Guy & Gamma Gal. He can fire blue plasma projectiles, which he uses to defeat Squidzoid.

Slipping through the night. Watching from the darkness. Striking from the shadows. Shadow Guy is the dark defender of Club Penguin, fearlessly bringing justice wherever he goes. Villains, watch out for his Shadow Wave!

Shadow Guy is a red penguin, and his outfit consists of: 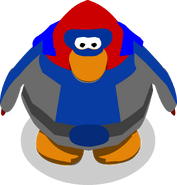 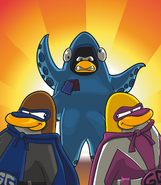 As seen on a Card-Jitsu Power Card, along with Gamma Gal and Squidzoid.