On January 30, 2020, the Snow Forts' design was updated, making it the third room in Club Penguin Rewritten to get a redesign after the Pizza Parlor and Dock.

During New Year's Day 2020, the new design of the Snow Forts appeared during the event, but did not gain much notice from players. The new design was reverted back to the old design on January 2, 2020 and stayed that way until January 30, 2020.

On January 30, 2020, the Snow Forts' new design appeared. Arrow signs had been put up, and there were now more trees, mountains and clouds in the vicinity of the Snow Forts. 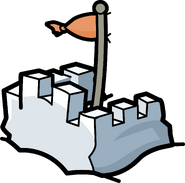 Dig Out the Island (phase 1)

Christmas Party 2017 construction and Dig Out the Island (phase 2)

Earlier version for the Music Jam 2020