The channel when it belonged to Stu.

Club Penguin Rewritten owns one Instagram account. It is used for announcing updates through pictures and stories.

Club Penguin Rewritten owns one TikTok account which was created on February 3, 2021. According to the account's biography, the account is meant to promote the game. 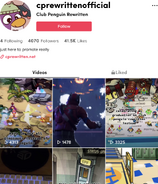 Club Penguin Rewritten currently has one public Discord server. Updates to the game are announced in there and community members can also chat in there.

In order to be verified, users must have a verified phone number linked to their Discord account before they can access anywhere on the Discord Server. Alternatively, they can instead direct message an Administrator on Discord to allow them in manually.

Note that the table below may not contain all existing channels; furthermore, not all channels may be in use and some may have been removed.

Standard channels that all verified members of the Discord can view and access.

Known channels that are restricted to Staff members only.

Other channels that may not fit into either two categories; also includes inactive and removed channels.

Voice channels 🔊 The Town, 🔊 The Plaza and 🔊 The Cove (384kbps) were closed on April 12, 2020 due to a lack of sufficient and proper moderating. Thorn originally stated that there was no intention to bring them back.[4]

Music channel 🔊 The Night Club was closed on May 17, 2020 due to to people misusing it. The 🔊 Pizza Parlor music channel was added for community member Perapin's Pizza Parlor Disco 2020 event on December 13, 2020 and was removed shortly after the event.

On July 21, 2021, the 📣 games-night channel was created. It is used to announce Games Nights. The channel is currently locked to those with the Games Night role only.

Role colors can only be viewed on desktop.

Roles that are currently in use.

Roles that are currently not in use.

¹ Currently not in use.
² Given to all staff members. Grants control of the servers' Bots.
³ Removed.
⁴ Limited-time use only.
✅ Permissions enabled.
❌ Permissions disabled.
❓ Permissions unknown.

The current Discord Server was created on February 6, 2018, replacing the original 2017 server as the latter still had Codey, a former Staff member, in it.

From February 2018 to June 2019, users had to message Staff members on Twitter in order to ask for an invite to the server. From June 6, 2019 onwards, the Discord Server became public and the invite was made available on the Club Penguin Rewritten website directly.

Following the Digital Millennium Copyright Act (in short, DMCA) takedown forms being sent to many Club Penguin Private Servers around May 13, 2020, verification to be allowed into the server was paused on May 14. This was to help the Discord Moderators due to a recent high influx of new users following the closure of another highly-popular Club Penguin Private Server, as well as to help keep the Community calm as many had questions over Club Penguin Rewritten's status over the DMCA.

Following significant events on May 15, 2020, where several Staff members resigned in protest of unfavorable working conditions, which also prompted protests within the Community itself, all community channels were locked on May 17, 2020, effectively "closing" the Discord Server. As a result, community members could not chat anywhere in the server.

Sometime later, the Discord invite to the server was removed from the Club Penguin Rewritten website.

Due to high tensions in the Community following the drama from May 17, 2020, Thorn announced that any rule-breakers will be instantly banned from the Discord Server without being given a prior mute or warning. This sparked protests and theories that Club Penguin Rewritten was possibly censoring users.

The Discord Server in December 2019.

The Discord Server a few days after the commencement of HTML5 testing.

The #open-ticket channel when the ticket system was out of service.

The channel created after opening a ticket through the ticket system.

The remains of the old Discord Server in 2021.

Club Penguin Rewritten has nine email accounts, each designated for a specific purpose:

¹Usually related to company and business-related inquiries, however sometimes given out to help users since the general support system is very long. [8]