The Soda Seas was an ocean which can found southwest of Club Penguin. You could access it by playing Aqua Grabber. It was the second level that could be picked, the first being Clam Waters. The water appeared purple, as it was polluted when a bunch of Cream Soda barrels fell in.

To complete the level, the player had to drop the barrels into the net, each giving 50 coins. This would open up new sections of the level and pure the water slightly, eventually leading the player to the amethyst treasure. There were enemies in the treasure section, such as the Giant Pufferfish and numerous small pufferfish, which would knock the player across the screen and drop the Amethyst if not avoided.

1: On the left side of the level the player would find an air pocket, if they bashed it hard enough, then a worm would drop. This worm could then be used to catch Fluffy the Fish or alternatively can be dropped into the net for a measly coin. If the player caught Fluffy, then they could use it as bait to catch the Mullet, or dropped it in the net for 200 coins. Choosing to do the mullet would have him fight to try and break free, if you managed to catch it, then you would get 1000 coins.

2: Go to the right-hand side of the level where the Mullet was located. The player would get rid of him, then go down the rightmost path. The player would find a bubble blower, treasure and a crab, taking the treasure would give them 20 coins for each piece. If they managed to take it all, they would get the Crab's Treasure Stamp, however, if they let the crab take all of the treasure, then it would give you an emerald worth 500 coins. 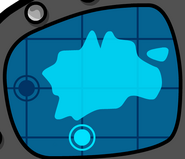 Soda Seas as shown on the Aqua Grabber Radar.
Community content is available under CC-BY-SA unless otherwise noted.
Advertisement