Rockhopper visited with a new background that will not return due to it representing a one-time event.

Following the return of Aqua Grabber in Club Penguin Rewritten's Hypertext Markup Language 5 (HTML5) client on January 28, 2021, the Submarine Party was confirmed to be taking place.

Construction for the party began on February 7, 2021. Following the conclusion of the 4th Anniversary Party on February 15, construction around the island was removed.

On February 17, Rockhopper and his ship, The Migrator was seen heading for Club Penguin Island through the Beacon Telescope when his ship struck an iceberg. Rockhopper and Yarr were forced to abandon ship on a small boat.

On February 18, the party commenced alongside the Save the Migrator Project.

The following stamp was also available to collect during this party:

A sneak peek of the Coffee Shop posted on Twitter. 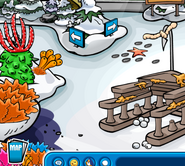 A sneak peek of the Snow Forts posted by Stu on Discord.