Team Blue's Rally Debut is a Stage play in Club Penguin Rewritten. It first premiered in January 10, 2018. It is about members trying out to be the Team Blue mascot. The play's first encore began on February 19, 2021. 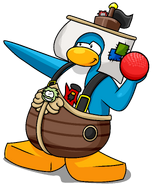 Zeus the Moose
Community content is available under CC-BY-SA unless otherwise noted.