The Fair 2018 was a party in Club Penguin Rewritten. It was announced in Issue 72 of the Club Penguin Times. Fair games from last year's party returned and tickets were re-introduced.

There were two ticket booths; at the Forest and the Great Puffle Circus Entrance where you could redeem tickets for prizes.

The party introduced global prizes where new items would unlock based on the amount of tickets that the overall community gained. It could be accessed via the ticket interface.

The following stamp was also available to collect during this party.

A sneak peek posted on Discord by Joee. 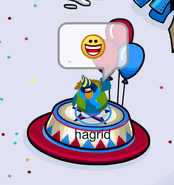 Earlier version of the Forest.