Club Penguin Rewritten Wiki
Register
Don't have an account?
Sign In
Advertisement
in: Currency, Miscellaneous, The Fair 2017,
and 9 more

Tickets were an exclusive virtual currency on Club Penguin Rewritten, that could been earned by playing games during Fair. They could been spent on certain prizes at the Prize Booth during the event.

Golden tickets were also available during The Fair 2019, The Fair 2020, and The Fair 2021, which could be used to spin the wheel at Spin To Win for a chance to gain a variety of prizes. One golden ticket was obtained by logging in daily. Further tickets could also be received randomly after playing a game at the fair, or bought for the price of 2,500-10,000 regular tickets. 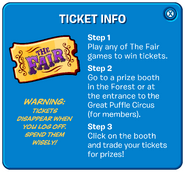 The ticket popup at The Fair 2020, after the update.

The ticket popup at The Fair 2021.
Community content is available under CC-BY-SA unless otherwise noted.
Advertisement