Yukon was a main character in the Stage play Quest for the Golden Puffle. He was an explorer, but was frightened by almost everything. He was sometimes annoyed by his co-adventurer, Alaska, who rushed into danger without thinking.

Yukon was a green penguin, and his regular outfit consisted of: 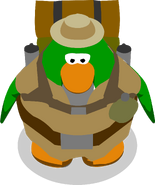